Look for the Butterfly

A few weeks ago, my 5-year-old daughter came running off the school bus, beaming as she explained to me through excited grins and mile-a-minute speech that it was finally her turn to be ‘student of the week’. Apparently, this is a REALLY big deal for a kindergartener… as in, it pretty much equates to becoming vice president of the classroom, second in line to the teacher, for an entire week.

“MOM! I get to be line leader and teacher’s helper and first for everything! I get to pick the story and I even get to sit on a special cushion during group time!”

As she continued talking about all the things that went along with this prestigious role, she pulled a large poster out of her backpack. She explained that this was to be completed at home and returned to school so that she could present it to her class at the end of the week. She then grabbed some markers and got right to work.

She worked for not one… not two… but THREE evenings in a row. This was a special project and it was evident that it meant a lot to her. She was meticulous. She took her time. Her answers were well thought out and her coloring was done with precision. This was a poster that exemplified who she was and she was taking it very seriously.

Sitting in the kitchen with me on that 3rd night, she worked quietly while I made dinner. Both her younger brother and sister were playing in the living room and every once in awhile, she become distracted and would walk away from the table, curious as to what her siblings were doing. I warned her that if she wanted to go play with them, she needed to put her work away (nothing can be trusted in this house of chaos guys… if you’ve been following me long, you’re well aware that my darling children are what I like to call, ‘toddler tornadoes’).

“No, mom. I don’t want to play with them. I want to finish my poster.”

A few minutes passed by… The kitchen was quiet, with the exception of some boiling water and a working mother trying to finish dinner. As I turned around to grab a wooden spoon from the kitchen drawer, I came face to face with the inevitable. My jaw dropped to the floor. While I expected to see my daughter coloring quietly at the table, I was instead met with the face of my 2-year-old son, guilty as ever, holding a red marker in his mischievous little hand. It was him who had been sitting quietly in the seat that was previously occupied by my hard-working daughter. He was hard-working now too… except his work involved scribbling all over his sister’s prized poster. 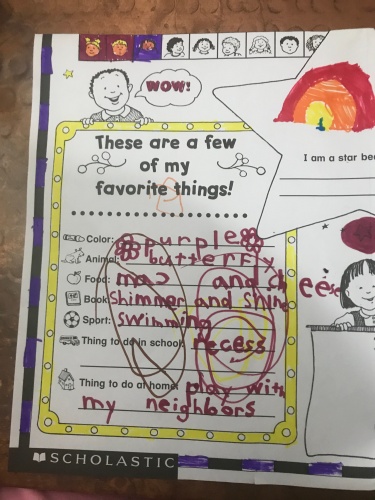 I gasped. I yelled. I lost all color in my face and felt my stomach sink to the floor. I was mad at my son for coloring something that wasn’t his work. I was mad at my daughter for doing the very thing I had warned her not to do. I was mad at myself for not being more aware of what was going on. I was also sad…. There was no doubt in my mind that my sweet girl was going to be devastated when she saw what her brother had done.

“AVALYNN!! Baby… I told you to put your work away. I told you not to leave it out. I warned you that something might happen if you didn’t pay attention… I’m really sorry… but your brother has colored on your poster….”

I showed her the scribbles. I watched her closely examine those thick, burgundy lines that could not be erased. I said nothing else and she said nothing back. In fact, she didn’t react at all. She simply studied the scribbles on this piece of paper that had consumed so many hours of her time. I was sad for her. I was frustrated for her. I was frustrated with the entire situation.

Together, we stood quietly in the kitchen, looking at the ruined poster. The air was thick (partially from that pot of water that was still boiling) but also from both of us trying our best to contain our emotions. I swallowed hard, preparing myself for the chaos I knew was about to ensue… To my surprise, the sweetest, softest, most timid and apprehensive voice responded…

She took the paper from my hands and sat back down at the table.

You guys… I expected a meltdown and instead, was met with simple grace. This 5-year-old child transformed what I saw as a ruined mess into a beautiful mistake. She wasn’t mad. She didn’t blame her brother. She didn’t try to defend her reasons for walking away. This sweet girl simply took a deep breath, evaluated reality, set her emotions aside, and found a solution ALL. ON. HER. OWN. At 5-years of age, she handled this ‘crisis’ with more grace and forgiveness than her own mother. She colored the ‘wings’, added a ‘body’, and within minutes, had drawn a butterfly that most probably would perceive as an intentional illustration to the answer regarding her ‘favorite animal’. 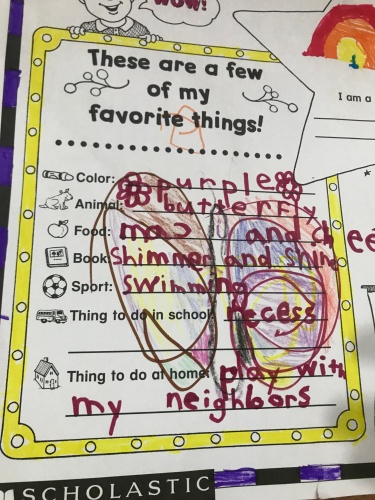 You know, we all have moments that leave us angry and frustrated. Moments we perceive as a crisis. While we don’t intentionally point blame or react irrationally, doing so is much easier than swallowing our pride and admitting our faults. It’s human instinct to voice our defense… In fact, avoiding accountability is part of our humanity.

Tonight, my 5-year old daughter defied that very intuitive response that many adults struggle to contain themselves.

When moments of crisis emerge… look for the butterfly. It’s easy to forget that we have the power to turn a mistake into something beautiful, something far better, by simply replacing impulsive frustration with grace.

As parents, we strive to say and do the right things, and teach the right lessons in all the right moments… Tonight, my daughter reminded me that parents are also human and that we’re still learning ourselves… Sometimes, our most invaluable lessons come from the raw moments with our very own naïve children.

My hope is that by sharing this story, you too will be reminded to look for the butterflies in your own moments of chaos and crisis. 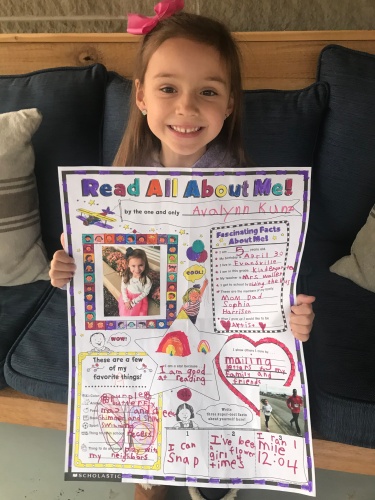 2 Comments on “Look for the Butterfly”

Hi, I’m Kayla! I’m a mom of three sweet toddler tornadoes who have taught me that parenting is one great big oxymoron. My life is controlled chaos, full of contradicting elements, ideas, and thoughts! If you enjoy stories of real moments and raw parenting, then you’re in the right place! Thanks for stopping by!